Tour of Russia – Day 5 & 6: MTL Arena in Samara + transcript of that great UPROXX documentary about LP

On the 19th March, a day after the concert in Yekaterinburg, LP and the band arrived to Samara. They were welcomed at the airport by my friends, Sandra & Martyna, and LP agreed to record a very special message for her Polish fans, you can view it here. This has definitely given us hope, that there will be some concerts planned for our country as well! And we cannot wait. Thank you LP, that you are so generous with your fans despite hectic schedule and being jet-lagged for sure!

Today LP performed at MTL Arena, with capacity 3500. According to my friends it was incredible concert and ‘Recovery’ was very touching and moving. There are many short videos floating on the instagram, look under – Универсальный комплекс “МТЛ Арена” – destination. I recommend feed of @the.royal.girl.anna, she posted many videos of really nice quality. There are also few pictures. Like I mentioned it will be harder for me to cover this tour due to the language barrier.

I couldn’t find any quotes I could use on my blog, my friends are on the airport, but if they will write something I will update my post with their words. I have however, quite a few links for you and something else… Let’s start with great gallery of pictures by Аквамарин-Арт. Those were taken during interview LP has given for 66.ru (you will find it by clicking here), there is also a gallery of pics of LP’s performance at Cosmos Concert Hall. That gold jacket is extremely photogenic! I love it.

Another interview (in Russian), for Sobaka.ru, can be found here. Google translator is doing rather good job if you are translating it into English. It’s worse when you are translating it into another language. When LP was in Montreal (during her North American Tour), she has given interview for 94.7 Hits FM, and it was shared today via Facebook. It’s called ‘Introduction Series” and you will find it by clicking here. Worth watching, that’s for sure!

Finally, back in February, while in LA, LP was recording something with Uproxx, it is the premier news and culture platform for the digital generation. We didn’t quite knew what it will be, but today it was finally revelaed. It’s sort of ‘Story behind an artist”, it’s called Come Backstage with LP, and it’s truly a touching, tiny material, explaining how LP rose to fame. We all know this story very well, but this time, we’ve got to hear also from those who are the closest to LP, when it comes to songwriting.

This documentary for the very first time shows snippets of interviews with Mike Del Rio: LP’s friend, songwriting partner and record producer; Nate Campany: LP’s friend & songwriting partner; and also Marc Jordan: LP’s manager & founder of Rebel One Managment. It’s a little bit different from everything we have seen and for the first time we hear ather people, people close to LP, speaking about her and her success. Since some of you can struggle with English, I have transcribed it for you. Enjoy!

UPROXX: The Story behind an artist

LP: When I was a kid, I was like, oh yeah I can sing that song on the radio, you know, better than a fiend could.

Mike Del Rio: I’ve never heard a singer like her before.

Nate Campany: It’s a once in a generation voice.

LP: I had these three songs the label wanted to hear, and they were like, those are really great but, we’re not gonna keep you on the label so they dropped me.

Marc Jordan: In our darkest moments when things were not always going, the best they said? don’t worry, we’re in this ditch together, this will work.

LP: Have you guys want something? I came from a family of lawyers and doctors so I didn’t think I’d be a musician. Something artistic was nipping at my back. Even though I didn’t become a doctor the RX (prescription/medicine) is a song.
I’ve had 7 record deals as an artist, 4 major label deals and 3 indie deals.

NC: Getting signed once being dropped, alone, like most people give up. (Mike: Yeah).

LP: I had no intention on being an artist I thought that part of myself was like kinda done.

MJ: 2010, my best friend told me about this girl who he saw at Sayers, named LP.

NC: I just remember thinking she was not human. [Nate you got it right!].

MDR: She just cut through the room, I mean it was buzz every time she just opened her mouth.

MJ: I knew I needed to be in business with her and then I said, you know what, the world deserves to hear your gift, I honestly think you should try being artist again. I really would like to manage you.

LP: The next year I got signed to another record deal. I put out a live record. and it had a really nice response and I started touring and it was going really well. And then I had these three songs the label wanted to hear, so I played them these three songs, one of them is called ‘Lost On You’, one is called ‘Strange’ and one of them is called ‘Muddy Waters’.  And they were like, these are really great, that’s fantastic but, we’re not gonna keep you on the label so they dropped me.
I was like, wow, again…

MDR: When you put yourself out there and you’re rejected, it’s really crushing, especially for something so naked like songwriting.

LP: It was a difficult time. I just withdrew a little bit. My subconscious kinda went, like, just write more songs. Write another record. If you’re truly an artist, you’re not waiting for an applause, and then you know, one man’s trash is another man’s treasure.
2016, ‘Lost on You’ got licensed by a different label in Greece, contected me through Instagram, believe or not, and the next thing I know my song was charting in Greece, and then Italy, and it went to number 1 in like almost 17 countries.

LP: This last year & a half, has really showed me what a song can do. Went from an opening band in the US to playing in front of 10.000 people that were just there to see me. And don’t stop writing songs, and it just keeps going. I’m just compelled to do it. To forge a connection with people.

MJ: If you’ve been signed to several labels, and it didn’t work out you have to be determinant, you have to have that mental strength to keep on pursuing your dream.

LP: This made me a very strong individual. That rush of knowing, you wrote something that you feel like will be in someone’s playlist maybe for their whole life, it’s the greatest feeling in the world. 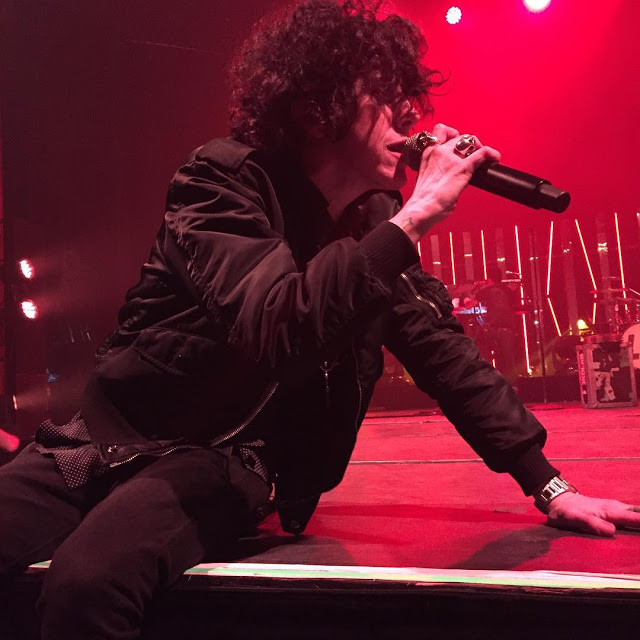