So, I should write a final post of this tour… But how to do it, what words should I choose, especially that I wasn’t able to be there in person. Yes, I saw live (thank you LP Gang!) but it’s not the same, it’s not enough, it will never be enough, I’m sure you understand… Today, I will start from my thank you, as LP, the band & crew deserve all the “thanks” in the world. Thank you LP for this one hell of a ride. Thank you for all the emotions – smiles of happiness & tears of affection. For your incredible voice & talent. For your kindness & patience. For taking your time & making sure that each and every fan had a time of the life. For being YOU – open, honest, optimistic, full of smiles & warmth YOU. For the interview- never been proud of something as much as of our conversation…. LP – big ❤ to you. Especially for Oświęcim, London & Ostrava. You are one of a kind.

To the band – JD, Elias & Brian – you complete each other and without you it wouldn’t have been the same. You are all awesome in what you do. To the crew – thank you for working behind the scenes so everything would run smoothly & for taking care of LP – Monica, Darren, Mike, Matt & Jason . Safe journey home! And I’ll see you again. UK/Fall tour here I come! I would also like to thank to all those lovely people I met during this incredible journey, for sharing your experiences with me and my readers, for all kind permissions regarding the ‘use’ of pictures, for all the kind words and encouragement, for taking time and writing to me, hell also for reading the blog! For everything – one huge THANK YOU.

Also, I wanted to add, that a final and actually the most proper goodbye to this tour will be when I will be able to publish my interview with LP – I promise it will happen, hopefully sooner than later. It’s still being edited by my friend, who is not a pro and has a job & kids, but he wants to do it right, so it’s taking a bit more time than planned, but I do hope/I believe it is worth waiting for. For now, the last concert of this tour that took place in Belgium, on the 6th of August at Ronquières Festival, in words of @whisper8272: “I was so happy to be lucky enough to hear and see LP again, as if there was no end to good things! The feeling is always so special: a mesmerizing experience. And I am… always  nervous and addicted. It was the last European gig but not the least… impossible with LP”.

“She came after Tom Odell on the stage that´s why you can see Brian wearing one of the festival’s hats with Tom’s name on it. There was a 2nd stage for this festival where the main French singer, that day was performing just before LP’s concert. Yet, it didn’t prevent many fans to miss his performance to stay in front of the 1st stage, empty for an hour and a half, to wait for LP.  It was quite late, around 23.00, when LP started so the atmosphere on stage was quite subdued. The installation of the equipment was effective with Darren going quickly here and there, waving at us and smiling with a good mood, with Mike and his indestructible cap and all the staff”.

“LP started with ‘Muddy Waters’, triggering screamings in the crowd. I always need a few songs to settle down at the beginning of her gig, as her voice combined with her lyrics and her music stirs me deeply… it’s a kind of magic! And how is it possible that I know the lyrics of so many songs, the a hoo a la la la la la yeah yeah, oh oh oh…oh oh oh, …?? How did they set in my mind? She sang her 14 songs with her usual trademarks. She hides her eyes behind her hair and her hat but undoubtedly looks accurately at us. She invites us to sing, points at people with a smile to reinforce the connection her voice established with our minds… already blown. She dances, sliding her feet on the floor to facilitate the undulations of her body, sometimes spinning around with energy. She is doing her job… “.

“For ‘Tightrope’, I threw a red ribbon at her (that makes two!!) which she picked up immediately… much to my delight. In the middle of the gig, she received a bunch of flowers which she put on her box and so many gifts when she came down to us during ‘Someday’, …even a little green chicken for Orson! Then ‘Lost on you’ was sung in chorus with us to conclude the gig. She made a video during it, maybe to keep a memory of the last minutes of this long, long European tour that she will watch again in a few days, sitting in her sofa or in her bed with Orson by her side, having a well deserved rest”. Thank you Whisper so much for taking time & writing… I really wish I could be there with you and other fans, I wish I could be everywhere where LP sings, but it’s not possible when you live in a tiny country as Poland… Hope, I really hope you will come back to us LP. We need you as much as an air to breathe.

And now, few words from Magali, ha! She was at that concert as well 🙂 Magali wrote it in French, so I tried to translate it as best as I could using google, poor thing she was really tired, but she went after LP from France to Belgium! Here are her words: “Before the concert I met many friends (from Belgium of course but also from Germany) – I first met them during the spring tour. There were many French fans too. As for this concert, it has gone too fast. We all wanted LP to extend her concert, but in festival it is rarely possible. LP and her band were unleashed on stage. The crowd was also unbridled. At the end of the concert the cameraman who was filming the concert for the giant screen also danced. Tom Odell and his band, who sang before LP, also came down to the stage to attend in a part of the concert”.

“Many fans came to this festival just for LP. But at the end of her concert we were even bigger in number: the young man who was next to me really was blown away by her vocals and scenic performance. It would also be interesting to know how many new one fans LP has conquered during this summer tour. I also find it crazy to have so crisscrossed France this summer and partly some of the European capitals in April to follow LP in concerts. I believe I have attended 15 of these concerts this year !!! I – a person usually so reasonable. We may cross in England for the English tour. For my part I will continue my tour of the festivals until the end of August, in order to continue to enjoy this special atmosphere at festivals”. Magali, thank you so much, for sharing LP’s concerts with me and for always having time to write, no matter how tired you are. I do remember how you came to me in London, and you were so kind and thougtful, and I do hope we will meet in UK during LP’s Fall tour.

Also, I would like to quote Marion, who shared one of many, and I DO mean many, kind gestures of LP towards her fans. @marion_lp.lrw.orson_fan: “This ticket shows how incredibly cordial LP is, always keen to do anything for her fans. It was very hot in Colmar. I had the ticket in my jeans pocket. When we met LP after the concert, the ticket was unfortunately very damp. On the right you see how she tried to give an autograph with a felt pen, but it didn’t work and it made a hole in the ticket. On the left you see a second try, but the felt pen has failed. But she did not give up. She just took the pen from someone’s hand just to get an autograph on the ticket. She is so incredible. Others would simply have sent me away. Thank you so much LP for your incredible patience. No matter how exhausted you are already. Love you so much for being like you are. ❤❤❤❤❤ “.

Gallery of pictures by Antenne Centre TV – Officiel, click here. Gallery of festival official pictures (with few pics of LP) can be found here. LP also given few interviews, but for now, I haven’t seen those anywhere to be posted/shared etc. My blog will be updated on regular basis, not as often as during the tour, surely, but I will try to keep you updated. There are already few more gigs in August & September planned, so I will see you sooner than you may think. Again, thank you for reading. 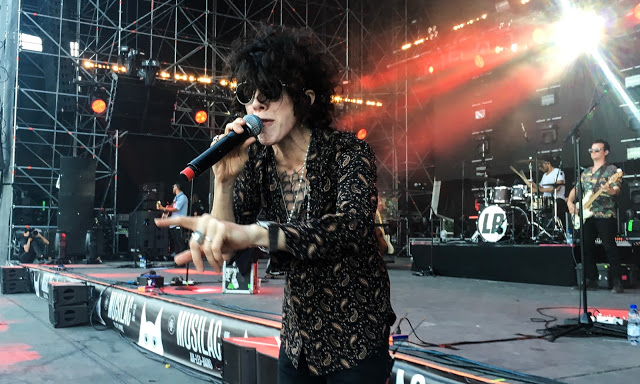