Ah, Poland, Polska, my home country… That day finally arrived, when I could see LP for the very first time on stage and listen to her live performance… My expectations were high, emotions were running wild, though I kept it all to myself, as long as I could… Before I will get to that part, first I would like to write a bit more about festival at which LP played.

LP took part in Tauron Life Festival Oświęcim at MOSiR in Poland. First, the city – Oświęcim, such a hard and painful history associated with this name and place… It’s a heavy topic but idea of Life Festival is much brighter. Life Festival Oświęcim is an idea of Darek Maciborek, a music journalist of a radio station RMF FM, who lives in Oświęcim. His intention was to “break the spell” of his home town that is commonly associated solely with the Auschwitz-Birkenau Museum.

The main concept of the Festival is to build peaceful relations beyond cultural and state borders where there is no place for racism, anti-Semitism, and other forms of xenophobia. The message of a peace and tolerance comes from the town where during the Second World War (WWII) was the largest Nazi concentration and extermination camp – Auschwitz-Birkenau. If you are unaware of concentration camps, in particular, Auschwitz, you should learn its history, so mankind would never ever do this again…

I was very pleased to learn that LP and members of her band, despite sleeping only 1 hour, took the tour of Auschwitz Memorial & Museum prior to the concert. If you’ll ever visit this place, you will be forever changed and I am sure this must have had an incredibly emotional impact on LP. She has such a sensitive soul. She mentioned this trip during her press conference, if you know Polish language you can read about it at Onet article. Part of her press conference was streamed live, to view it, click here.

But now let’s move on, to that more cheerful part ot the day. I arrived to Oświęcim by train in the afternoon, thankfully I found the time to eat some dinner as it was the last meal of the day. I was at the gates just before 4 pm, right when they were about to be open. I found my friends of Total Freedom LP Fans, and when the time arrived we managed to get some nice place right next to the barriers separating crowd from the stage. We all got tickets to the Red Zone, so this task was a bit easier.

After securing our place for the concert, we were waiting patienly for the news wheter my friends and myself (as admins of Total Freedom LP Fans fanclub and me as well as a blogger) will get to be part of ‘meet & greet’ with LP. When that email came, when we knew we had the green light, for the first time it hit me that I will be seeing LP not only on stage but also in person. However I still managed to keep it cool.

About half past 6 we all gathered in the spot, then we were taken to a press tent, and there she was, our Queen, our Boo Boo – LP! In all the idocity I went to greet LP first, and I did the same thing as I did in Empik. I was so nervous and so cautious of her timetable, that I think I only managed to say hi and take a pic. And that was it… Afterwards I was very disappointed with myself, but thankfully seeing LP getting our gifts, so carefully chosen and prepared made me sooo happy!

Here, I would like to say huge THANK YOU to our fanclub members who made it all possible, without your time, effort and money as well, we wouldn’t have been able to prepare for LP what we have did… LP has gotten an album with pics of our fanclub members, who took part in our photo-contest “Being Like LP”, you can also view those photos by clicking here. Some will simply blow your mind.

LP also got her favourite wine, some scarf, things for Orson, T-shirt with our button, brooch of tiny guitar, though it looked more like ukulele. She also got 6 brands of Polish beer, we connected their taste with LP’s songs titles and those should be drink in special order, as recommended in our letter to LP, she should start with ‘Bombs Away’, follow with ‘When We’re High’, then will be ‘Road to Ruin’, with ‘One Last Mistake’, finally ‘Little Death’ awaits with ‘Heavenly Light’ at the finish line!

We were VERY happy that our gifts, beers especially were appreciated by LP, that she featured those and our fanclub in her Insta-story. I was also very happy that crow-skull pendant, which we got because of her jewellery taste, LP took off the box, put in on and kept it throughout the concert. This has made LP’s show even more extra-special. We had a live of our meeting with LP & you can view it by clicking here.

I would also like to mention another Polish fanclub, LP Poland, their members also gotten gifts for LP, here I am featuring their  plush ukulele made by Uchatka, and her project ‘plush toy with cause’, this person creates this great toy and the money collected for the toy, by LP Poland fanclub members went straight to 2 foundations, one that is fighting with cancer (Fundacja Rak’n’Roll Wygraj Życie) and second that is protecting animals (Viva! Interwncje). It was also a cool idea. Well done.

And now, the concert… WOW, I was expecting to be blown away, but I don’t think I was prepared for what I have witnessed… And I have witnessed, in that tiny body, a god on stage. And all those emotions that were building up throughout the day, and all those days leading up to LP’s concert, came down like a waterfall of tears along with the first song of ‘Muddy Waters’. It was like being in ecstasy, it was something pure and new to me. I have been to concerts before, I have seen greats (Metallica & U2 to name a few) but what LP did to me is unbelievable.

It’s really hard to put it into words, all those feeling that are still inside me, tears that are still falling when I’m remembering some of the moments… I was singing my ass off to the most songs of LP. I had no idea I can scream that high and that strong seeing her. There were moments when I was simply sobbing, there were moments when I was smiling like mad and waving to her. There was one moment, when I felt like that green-haired girl mentioned some posts earlier, when I catched LP’s eye and saw her hand pointed in my direction.

There were times when I just shut up to fully appreciate her voice and stage charisma, I think You Want It All was that song that made me totally mute… The crowd was wild, you could almost feel the energy and LP took that energy from the crowd and put it into her performance, I could literally see her being blown away by the crowd and singing her songs with such huge passion, it was like being in total harmony with the crowd.

LP took her time to talk to the audience for just a little bit, as her set was only 1 hour and maybe 5 to 10 minutes long and she still managed to sing 15 songs, the one song that was missing from the playlist was ‘Switchblade’, but perhaps good thing it didn’t happen as I know it would have torn me to pieces and no other song would made me whole again… ‘Lost On You’ was sung almost like with the choir, as the whole crowd helped LP. But what’s most important, with that concert, she has showed an unaware audience, that she is not just a star of 1 hit, but that she IS the star.

I saw Scorpions’ fans being amazed by her voice and skills, she showed those sexy dance moves, she interacted with the audience throughout the show and made it for many people a night to remember. Now, witnessing what I have witnessed I am double happy before her gig in London, especially that it will be an acoustic concert and a small club. Krysia, I will be forever in your debt for this opportunity.

I will end my post with message to LP. Our Queen, our Boo Boo. THANK YOU. For all the emotions, that have been hiding inside me and finally finding their way out. For bringing me closer to this state of being in peace with myself. For helping me meet all those awesome people, who all have one thing in common, sensitive soul. Thank you for being true to yourself and not putting up with the shit. And for taking time to meet with us and kindly accepting our gifts. I also would like to thank to the band: Elias, JD & Brian, without you it wouldn’t be the same, you are all awesome in what you do and I am happy to see LP with such talented musicians. Thank you, and I’ll see you again, I’ll see you again! PS. Special thanks to all those people working behind scenes, Mike, Jason, Darren & Matt.

And now for some links. Gallery of pictures is here, here, here, here and here (including short video of LP). Another Polish article mentioning LP is here. The most amazing video from the concert, ‘Tightrope’ – click here. Tiny video where you can spot me is here! I also recommend visiting Jakub Jarka Youtube channel, as he recorded the concert! Click here. Btw, there was a merch shop so I finally got my LP T-shirt, which I am wearing as I’m working on this post and I also got scarves in all three shades, black, blue and red! I went mad, but it was worth it ? A night like this, will never be the same. 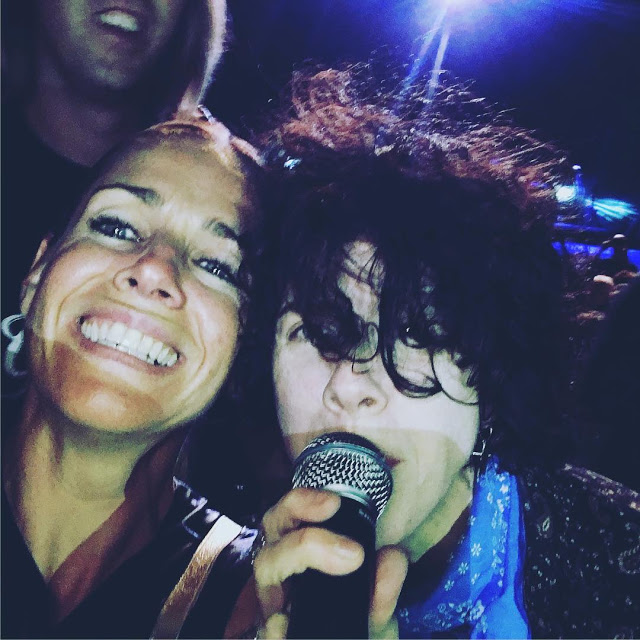 Interview with LP for LP Blog, backstage at the Open’er Festival in Gdynia, Poland

So Happy for you !
Cheers to all the Fans of LP !
And many many thanks to LP! Keep on Truckin'

You mentionned that LP wrote a song called "Bombs Away", however I can't find it on YouTube… Do you know when she wrote it and where we could listen to it? 🙂

I'm afraid it's not available to listen. LP wrote it a while back, circa 2008 or so, I know it's title from LP's old setlist 🙂

Ah too bad! Thanks anyway 😉

A lovely write up..happy you got to have this magical experience..it will be treasured I'm sure..😊❤

I´m soooooo happy for you! <3 Can´t wait your post from London!