Photos in the gallery courtesy of photographer, Domenica Prinzivalli. You can find her pictures by clicking here.

Sorry with delay with my posts, it’s a just a bit crazy period in my personal life, good thoughts in regards with my cat are very welcomed. And now back to business. From Padova LP went to Zafferana Etnea in Sicily, where she gave a concert at the Anfiteatro Falcone Borsellino. And let’s start the recap of that day with words courtesy of Magali. “I think this concert was a bit special for LP. It was her first concert in Sicily, the homeland of her grand parents. [LP: my paternal grandfather was from Palermo]. It was a seated concert and the first row was very far from the stage.”

“First I would like to thank the members of LP Italia Official. Before the concert they came to see everybody in the first rows asking them to stay calm during the concert so that LP could feel safe to come to see them… Sicilians respected this during the whole concert and LP came many times near the public, because she felt safe. During the concert a ‘scarabee or something like that’ [direct quote from LP – Magali had a chance to talk to LP at the airport, their shared the same flight] found his way to LP’s shoe. She put it to safety far from her.” [As visible on Mishka’s video].

“At the end of the concert LP came back with a ‘Switchblade’. And then she played ‘Forever For Now’ for her parents. We could hear the emotion in her voice. It was really a very particular moment, and I am so happy to have been there just for that moment. The lights were making 2 shadows of LP on the floor and it was a bit like it was her love for her parents, or their soul which was with us.” And a few more words courtesy of LP UK Official: “Zafferana Etnea… what can we say? The location was beautiful, a typical Sicilian village with its amphitheatre.” 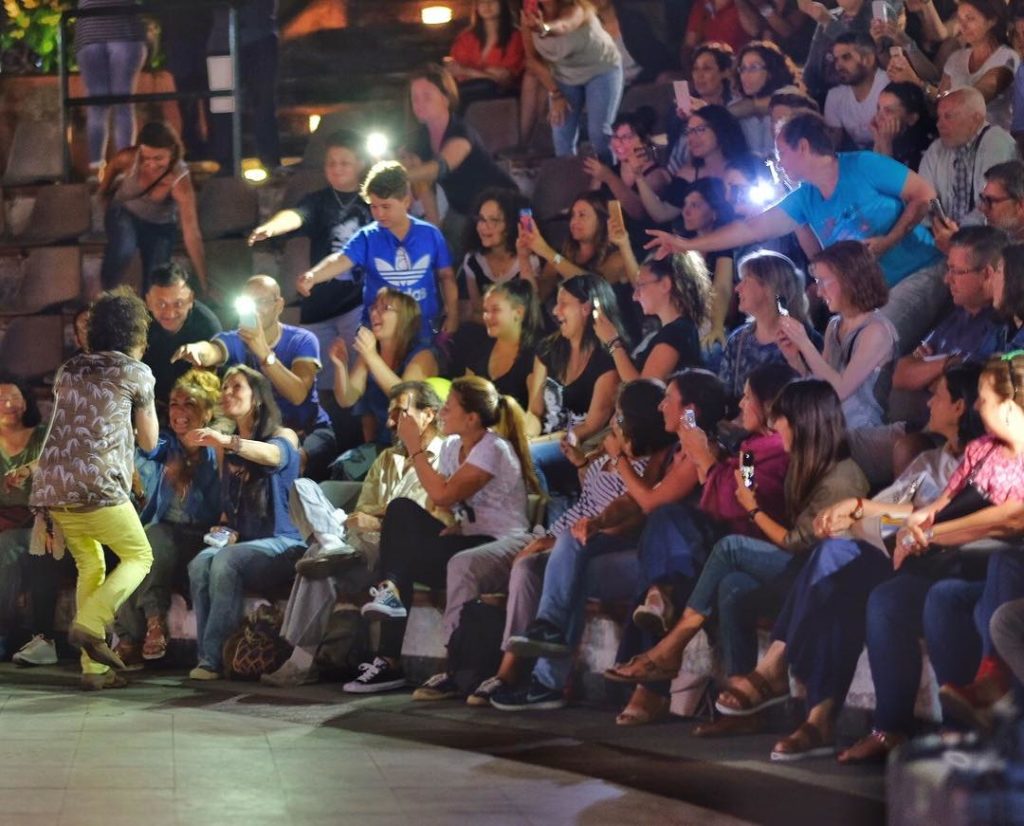 “‘Doors opened’ at 7 but how fantastic that we didn’t have to queue. The crowd was mixed with locals and fans but after a while it wasn’t clear who was a local and who was a fan! As soon as LP realised that that open space between her microphone and the first row was purely for her to float around, she did just that. The whole floor was hers. She scoured every angle of it. She threw herself into the crowd and sang from there. Security had no chance but thankfully everyone was respectful.”

“Whenever LP disappeared into the crowd Talayeh came running over but even she realised LP was safe so collected the presents instead! LP mentioned early on that her grandparents were from Palermo, Sicily and soon enough the fans from Palermo handed over a banner which she promptly placed proudly on the stage. This set the electric emotional atmosphere for the evening. This wasn’t just a concert for LP, it was a stirring, sentimental performance because this was a true Sicilian girl coming back home.”

“The evening ended in the most moving way possible with Forever for Now dedicated to her parents. I swear she got off stage quickly with tears in her eyes, she certainly left us in tears.” Thank you girls so much for sharing your emotions with us. It sure did look like it was an emotional concert for LP and her interaction with the public was incredible. I really wish I could have been there for that moving rendition of ‘Forever For Now’, but you cannot have everything. Glad that you were there and could hear it!

Next concert for LP was in Ludwisburg, however I may try to keep up with the present concerts and will add my thoughts later on, when I will catch up with everything. For gallery of pictures & review from Zafferana Etnea concert click here, another review is here, lovely set of pictures can be found here. And info from the last minute, at the store Discoteca Laziale in Rome, Italy on the 30th July, there will be a Meet & Greet of LP with her fans. In order to attend the event, you need to buy the Deluxe version of LP’s album “Lost on You” in the store where the event will take place. Details in the calendar section on the blog!

Cities 97 Live At The Lake at Waconia, MN in USA & nomination to AIM Awards 2017